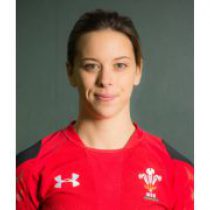 The Aberaeron product came through the system where her impressive work in the back row made her a key figure for Wales at Under 20 level.

In January 2017, she was named in the Wales Women team that would compete at the 2017 Six Nations.

Her name was further included in the squad for the 2019 Six Nations after a chain of impressive performances.