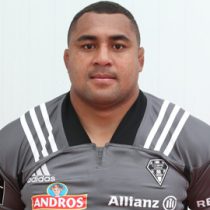 A destructive no.8, Koyamaibole was born in 1980 in Suva Fiji. Since leaving Fijian shores in 2006 to pursue his professional career elsewhere, Koyamaibole has enjoyed stints at Petrarca, Toulon, Sale Sharks and Lyon OU. The powerful ball carrying 8's international career began in 2001 when he lined up against Tonga. Since making his debut, Koyamaibole has featured in three consecutive world cups while also representing his country in the 7's format.