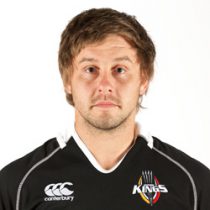 A product of Stellenbosch rugby, Greef represented Western Province in U19, U21, Vodacom Cup and made his senior Currie Cup debut in 2011. The talented second-rower then moved up to Johannesburg in 2012 where he began his Super Rugby career and ran out for the Lions in the Currie Cup.

After his time the Lions Greef signed for the Leopards where he spent one year before moving onto the Griquas on a two-year deal.

In 2016 Greef signed a deal that saw him move to the Pumas.