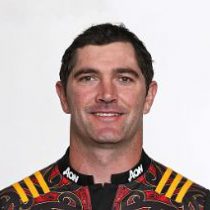 Donald progressed through the age group levels in New Zealand where he played for his local province, Waikato, since 2004 including 85 Super Rugby caps and well over 800 points in that competition for the Chiefs.

He has widely been criticized for his international form stemming from the 2010 Bledisloe Cup game where he missed a penalty and a touch finder giving Australia the opportunity to win the game.

Despite that he was the man responsible for kicking the winning penalty for the All Blacks in the 2011 Rugby world Cup Final. Since that he seemingly ended his career with a 2 year stint at Bath but in a turnaround he resigned with Waikato in 2015 for the ITM Cup.

2016 saw Donald captain Chiefs for the first time in the club's first ever international game, played against Wales.

In November of the same year, he signed a deal to play for Suntory Sungoliath in the Japanese Top League.

Stephen Donald has earned 23 test caps for New Zealand and has 90 Super Rugby Rugby caps ahead of Super Rugby 2017. He has scored 859 Super Rugby points which includes 19 tries.

Cult hero Stephen Donald was a surprise omission from Waikato Mitre 10 Cup squad for the 2017 campaign.

In August 2017, Donald kept a promise to his father to return home to re-join the Counties Manukau Steelers for the 2017 Mitre 10 Cup.

After some speculation around his retirement, Donald signed with Japanese side Brave Lupus.

In February 2019, Chiefs announced that Donald would return to play for the club for the 2019 Super Rugby Season.