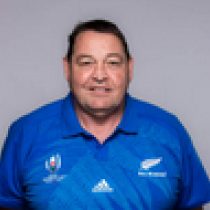 Hansen has been coaching for more than two decades at club, provincial, Super Rugby and international level.

He was appointed Head Coach of the All Blacks following the team's Rugby World Cup 2011 victory, after serving as Assistant Coach for eight years, and took the team to back-to-back RWC victories in 2015.

Before joining the All Blacks, Hansen coached Wales for two years, was Assistant Coach of the Crusaders during their title-winning seasons in 1999 - 2001 and won titles with Canterbury in 2001 and 1997.

In November 2016, Hansen was named World Rugby's Coach of the Year for the fourth time after seamlessly managing to transition the All Blacks through the retirements of key figures like Richie McCaw, Dan Carter, Ma'a Nonu and Conrad Smith after RWC 2015.

The start of 2018 saw France tour New Zealand for the first time since 2013, and Hansen led his side to a 3–0 series win and retained the Dave Gallaher Trophy for the fifth consecutive time.

During the 2018 Rugby Championship, Hansen led his side to a 6th Championship title, winning five games. The only loss was to South Africa in the fourth round, 34–36, which saw South Africa record their first win against New Zealand in New Zealand since their 32–29 win in 2009.

The start of 2019 for Hansen saw his side finish third in the Rugby Championship; the first time they have finished in that position since The Rugby Championship inception - the last being during the 2004 Tri Nations Series. The Championship saw a first draw against the Springboks since 1994, followed a record levelling defeat at the hands of the Wallabies, 47–26.

Despite that score, New Zealand went onto secure the Bledisloe Cup after beating Australia in the return leg 36–0.

In the 2019 Rugby World Cup New Zealand topped its pool, defeating eventual champions South Africa, but was comfortably defeated in the semi-final by England, and beat Wales 40-17 in a bronze-medal match.

In December 2019, he was confirmed as the new director of rugby for Japanese Top League side Toyota Verblitz.

In August 2020, Hansen was officially knighthed for his service to New Zealand rugby.

Steve Hansen's career as the All Blacks head coach 👏