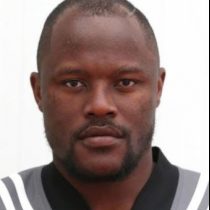 One of the game's most feared wingers, the Zimbabwe-born American international shot to prominence in the pool stages of the 2007 World Cup when he went around Bryan Habana with ease. Having seen his blistering pace take him round supposedly the quickest man in world rugby, Biarritz were quick to snap up the signature of the then 22 year old.

Having joined the Top 14 giants, Ngwenya's game has progressed well and he is now regarded as one of the game's most lethal finishers. A real game-changer, Ngwenya looks set to be terrorising defences across Europe for years to come.

In September 2016, he took his skills to Brive, where he signed as a medical joker.