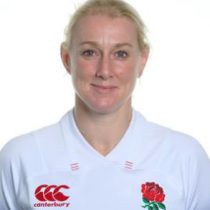 This is Tamara’s 12th year in the England squad. Some of her career highlights include beating New Zealand in 2009, winning the 2014 World Cup and being the Premiership Player of the Year for 2015 as career highlights.

With her mother, Teresa, captaining the Zambian golf team and her brother being a British U16 Real Tennis champion, a life in sport was inevitable for Exeter-born Tamara.

An RFU Community Coach, she has appeared in three World Cups since first playing at Reading’s Oratory School when 11.

While at Newcastle University, where she gained a BSc (Hons) in Biomedical Sciences, she was chosen to represent Great Britain Students at rugby league.

Taylor has also played for Henley, Novocastrians and Thirsk and became only the third England player to reach the 90-cap landmark - when Wales were beaten 20-13 at Twickenham Stoop last March.

Having been named in the 6 Nations, she polished her skills and received a call-up to the 2017 Women's World Cup, where she will look to add to her 105 Test caps.