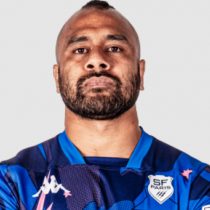 Nicknamed TV, Telusa Veainu is fleet-footed outside back that isn't too far away from producing something that will go viral.

Born in Kawakawa, New Zealand, Veainu went to St Andrew's College in Christchurch where in his final year of school he was made captain of the 1st XV.

He was a regular in Canterbury age-group sides over the years, making the U16s, 18s and 19s whilst still at school and went on to play a starring role on the wing for the NZ U-20s at the World Cup in Argentina where he scored five tries (including three in the final).

Following his form with the u20s, he was selected into the Canterbury squad for the 2010 ITM Cup. He made his debut off the bench against Hawke's Bay and subsequently started in every match, scoring eight tries as Canterbury won the championship. After a standout ITM Cup season in 2010, Veainu received a contract to play for the Highlanders for the 2011 Super Rugby season. He made his debut in the Highlanders win over the Bulls in week 3 of the competition.

Playing with Canterbury again for the 2011 ITM Cup, Veainu scored a further 5 tries in 11 games, in the process helping Canterbury win their fourth consecutive title. Veainu missed out in Super Rugby 2012 and made a switch to the Crusaders for the 2013 Super Rugby season before making a permanent move to the Rebels in 2014.

The move to the Rebels saw Veainu get more first-team action leading to him being included in Tonga's 2015 Rugby World Cup Pacific Nations Cup squad where he made his debut in the opening match against Fiji, scoring a try.

He was subsequently named in Tonga's Rugby World Cup squad with his form at the tournament seeing him sign for Leicester Tigers in the Premiership. In November 2017, he agreed a contract extension at the club following some eye-catching form in the 2017-18 season, scoring five tries in 8 appearances for Tigers, in his third season with the club. In May 2018, Veainu was voted The Player's Player of the Year at the 2018 RPA Players’ Awards.

After 79 appearances and 32 tries for the Tigers, Veainu was released from his contract at the club in July 2020 following his refusal to take a 25% pay cut to reflect the impact of the coronavirus pandemic.