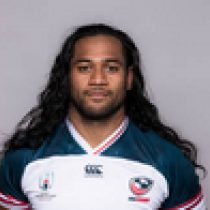 Palamo is a big ball carrying centre. He is very effective at taking the ball over the advantage line as well as a defensive wall.

Having played for Samoa U19 he has spent some time in French Club Rugby and at Saracens in England. He is a talented sportsman having done well in school at both Basketball and American Football.

Palamo represented the USA during the 2007 Rugby World Cup, becoming the youngest player in history to feature in the tournament at that time.

Palamo spent last season on loan at London Welsh, making five appearances before a call-up to the USA Sevens team.

Thretton joined Bristol Rugby for the 2016/17 Premiership campaign. The bulldozing 107kg centre – who has fifteen caps for his country - arrived from Saracens.

In September 2017, he signed a short-term deal with Welsh club Dragons as injury cover.

The versatile player, who can play in the centre and on the wing, joined Bristol in 2016/17, adding support to the Dragons backs due to injuries.