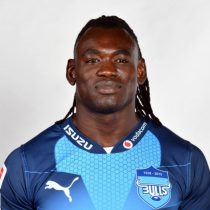 A product of Transkei Primary and Stirling High School, Agaba made his way up the rugby ranks via Border’s U18 Craven Week’s side in 2007.

His route thereafter followed the Sharks’ Under 21 tournament (2010) and NMMU in the Varsity Cup Competition.

He has also made appearances for the EP Kings side in the Vodacom Cup and Currie Cup Premier Division in 2015.

Agaba was then included in the 12-man Springboks squad for the 2016 Summer Olympics in Rio de Janeiro, and was named as a substitute for their first match against Spain, with South Africa winning the match 24–0.

After winning the Sevens World Series in 2017 and an Olympic Rugby Sevens bronze medal, Agaba, signed a deal with the Bulls that will see him remain with the club until 2019.

Agaba will leave the Blitzboks ahead of the Super Rugby season and will look to make his Super Rugby debut in 2018.