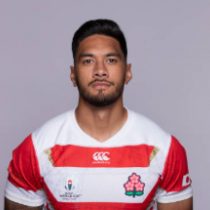 Lafaele was born in Samoa, but attended secondary school at De La Salle College in New Zealand before completing his education at Yamanashi Gakuin University, Japan.

He has played all of his senior rugby in Japan with Coca-Cola Red Sparks, who he joined in 2014 but he also represented the Sunwolves in Super Rugby.

Lafaele only featured for once for the Sunwolves in the 2017 Super Rugby season, despite this he was named in Japan's squad for the June internationals & November Series.

He was named in Japan's squad for the 2019 Rugby World Cup and has made 22 appearances heading into the quarter finals of the tournament.