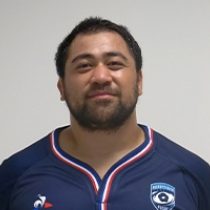 A former footballer and wrestler, Lamositele started playing rugby in 2013. He played for the USA Rugby Boys High School All-Americans before getting called up to the Men’s Eagles During the Eagles’ World Cup qualifier against Canada in August 17, 2013, where he broke the record for the youngest player to play for the Eagles.

Following his Nov. 2013 start against Russia, Lamositele signed a contract with Saracens of the Aviva Premiership.

Lamositele is a member of a young core of Sarries players who developed their game together at the club over the next few years.

In May 2017, he was named in the USA Men's Eagles squad for the Summer Series and Rugby World Cup 2019 Qualifiers in June and July, having won 17 caps.

In May 2019, he was named Sarancens Young Player of the Year.

The following year he chose to remain with relegated Saracens and completed the team's squad ahead of their Championship entrance.

Lamositele accepted a deal with Top 14 side, Montpellier.

Sarancens Young Player of the Year 2019