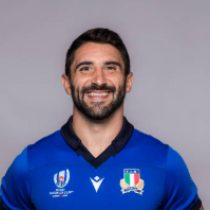 Tito is from a family of rugby players, Uncle Daniel has 13 caps with the Italian national team and was part of the World Cups in 1987 and 1991.

In 2006, Tito he moved to the Grand Duchy Parma, making his debut in the Super 10 and in the Challenge Cup.

In the 2013/2014 season, his Celtic experience continued in the Welsh with Ospreys before moving to London to join Harlequins.

In May 2016, Tito signed to join Benetton Treviso.

Tebaldi continued to impress with Treviso during the 2017/18 season and was included in Italy's 2018 6 Nations squad after 23 test caps for the Azzurri.

He was named in the 2019 Six Nations squad with 7 previous 6 Nations appearances.