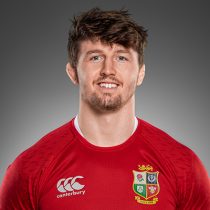 Meteoric is the only way to describe Tom Curry’s rise through the ranks. A hard as nails openside flanker, Curry is versatile across the back row.

Curry made his professional debut against Scarlets on the 15th of October 2016 in the European Champions Cup, becoming (at the time) the fourth-youngest English player and youngest Sale Sharks player to have played in the competition.

He is the twin brother of Sale Sharks flanker Ben Curry, with whom he was named in the England U20 squad for the 2016/17 season, having previously represented England U18. Both players have now gone on to represent the senior national side.

In the 2017 season, him and his brother became only the fourth set of twins to play side-by-side in the Premiership. Tom also became the youngest player ever to score a try in the Premiership when he touched down at Bristol before signing a 5-year deal with the Sale in February 2017.

In his first England appearance against the Barbarians on 28 May 2017 he was named Man of the Match The flanker made his England debut against Argentina on the 2017 summer tour, five days before his 19th birthday, at the time becoming the youngest player to start an international for his country. Only Jonny Wilkinson has been a younger debutant for England and his performances for club and country saw him soon command a place in Eddie Jones’ starting XV.

Curry had an outstanding Six Nations starting in all five matches and made the most tackles of any player during the 2019 Six Nations with 86. He also won the fourth most turnovers (5). His brilliance during the tournament earned him a nomination for the Player of the Championship, finishing with the most tackles of any player in the tournament (97). This performance ultimately sealed his place in the Rugby World Cup squad. That was just the start of a year to remember for Curry, who helped Sale reach the European Challenge Cup semi-finals before proving just as influential in England World Cup final run. At the age of just 21, the flanker was the youngest player in England’s squad at the 2019 Rugby World Cup.

He formed a formidable partnership with Sam Underhill at the World Cup with Eddie Jones christening them as the "kamikaze kids". Curry started 6 games at the World Cup, including the semi-final win over New Zealand and the loss in the final against the Springboks, taking his cap tally to 19 while also earning a nomination for World Player of the Year.

Having cemented a place in the England back row, Curry was involved in the 2020 and 2021 Six Nations. He won a turnover or penalty, or slowed down 15 of the 37 defensive rucks he hit during the 2021 Six Nations.

Curry was named in the British & Irish Lions 2021 squad for their tour to South Africa. He played in both touring games against the Sharks and starred in the loss to South Africa taking his Lions appearances tally to three before the test series.