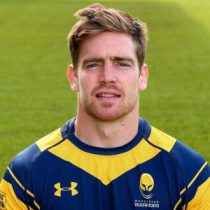 Inverness born out half Tom Heathcote made his Scotland debut off the bench a November 2012 defeat to Tonga in Aberdeen.

Despite being born in Scotland, Heathcote grew up in England, attending Bishop Wordsworth’s School in Salisbury, the same school Richard Hill and Dave Egerton attended.

Tom’s impressive school form saw him seal a move to the Bath Academy. Heathcote’s form for Bath was good enough for him to win England caps at U-16, U-18 and U-20 level.
Heathcote’s first team bow for Bath came in September 2011 in a League game against Gloucester.

He made his Scotland debut during his time at Bath and has gone on to make three appearances for his country.

Before arriving at Sixways Heathcote rose through the ranks at Bath Rugby, where he was nominated for the LV= Breakthrough Player award in 2013, before moving to Edinburgh Rugby for a season in 2014.

The 25-year-old, who arrived at the Club in the summer of 2015 from Edinburgh, enjoyed a successful debut campaign in the Blue and Gold and became first-choice fly-half.

In April 2017, Warriors are delighted to announce that the Scotland international has put pen to paper on a new contract to extend his stay at Sixways.

Despite being ruled out for the second-half of the current campaign, Heathcote has gone on to rack up 161 points in 29 appearances for the Club.

He made his Scotland debut during his time at Bath and has gone on to make three appearances for his country.

Heathcote's contract wasn't renewed by Worcester for the 2018/19 season.