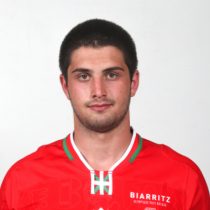 A brutal and hard-nosed blindside flanker, Tornike Jalagonia was a standout for Georgia in two u20 World Championship in 2017 & 2018.

His performances caught the eye of Top 14 hopefuls Biarritz who signed the flanker up during the 2018/19 season.

Jalagonia broke into the Georgian national side during the Rugby European Championship in 2020 and was named on the bench to make his debut against Portugal.