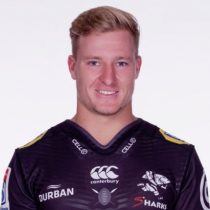 Johannesburg-born Blewet grew up in Pietermaritzburg in KwaZulu-Natal and attended Hilton College, where he was included in various KwaZulu-Natal provincial teams.

In 2012, he represented them at the Under-16 Grant Khomo Week in Johannesburg and the Under-18 Academy Week.

After school, Blewett joined the Sharks Academy and was included in the Sharks U19 squad that participated in the 2015 Under-19 Provincial Championship.

He made his first class debut on 23 April 2016, coming on as a replacement in their 48–18 victory over Namibian side the Welwitschias and made a second appearance four weeks later in a 16–53 defeat to a Golden Lions XV.

At the end of October 2016, Blewett was included in the Sharks Super Rugby squad for the 2017 season but failed to make his debut during the 2017 season.

He was once again named in the Sharks 2018 squad until the end of the season.