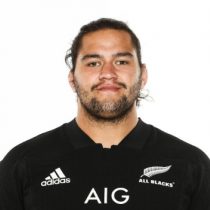 The son of Canberra Raiders legend, Johnny Lomax in the National Rugby League, Tyrel has chosen Rugby as his path into professional sport.

Tyrel returns to the Australia U20s after a successful stint in 2015, but returns a physically fitter and stronger player.

In July 2016, the Rebels announced to have signed the hulking Australian U20s tighthead prop from the Brumbies.

After impressing for Melbourne Rising in the 2016 NRC, Lomax made his debut for the Rebels in 2017 and went on to play in 13 of the Rebels 15 Super Rugby matches.

In September, Tyrel signed with the Highlanders and Tasman Makos for the 2019 season.

Lomax will complete his contract with the Rebels, unless he is granted an early release, then link up with Tasman and the Highlanders in 2019.

Lomax was granted an early release and rejoined Tasman for the 2017 Mitre 10 Cup where he was one of the sides top performers and earned a call up to the Maori All Blacks squad for their end of year tour.

In June 2019, he signed a four-year deal with the Hurricanes through until at least 2023.

Ahead of the 2020 Super Rugby season, Lomax has obtained 30 caps