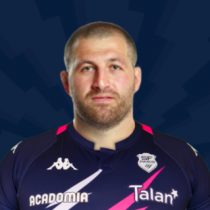 Kakovin started his career with Georgia as back rower, as a 17-year-old he played either flanker or number 8 in the Under 19 World Cup for Georgia.

A year later, he played in the inaugural Junior World Rugby Trophy as a versatile front rower, starting at either hooker or prop.

Soon after Junior World Rugby Trophy, Kakovin won his first cap for Georgia before his 19th birthday against Scotland A in November 2008, and holds the record for youngest ever Georgian prop on debut.

The then-youngster continued to be part of the Georgian squad when the plethora of props playing in the French top divisions were unavailable, after the 2010 IRB Nations Cup he signed with Top 14 side Brive, it was as this point where he stopped playing hooker and focused on being a specialist prop.

He played twice in the 2011 RWC which led to him being selected as Georgia's first-choice loose head.

Vasil made 38 appearances for Brive before signing for Toulouse in 2012, as replacement for the retiring South African international Daan Human.

In June 2017, Kakovin made the switch from Toulouse to Racing 92 after 34 games and five years at the club.

The Georgian international joined the Parisian giants alongside Census Johnston & Patricio Albacete for the 2017/18 campaign.

The 2020 season saw the Georgian international sign a deal with Stade Francais.