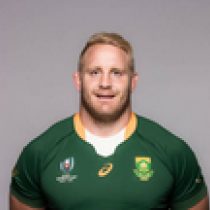 Having started off playing for the University of Pretoria (Tuks), Koch made an impact and earned himself a contract at the Puma's to play Currie Cup. From here the solid prop got a call up to the SA President's XV to play in the 2013 Tbilisi Cup which they went on to win.

In 2015 the Stormers signed Koch after a sensational Currie Cup season and set Super Rugby alive with his brute strength and great scrummaging ability.

Koch made his full debut for South Africa in the 2015 Rugby Championship as a replacement against the All Blacks.

His performances did not go unseen by the national coach, Heyneke Meyer, who selected him in the extended RWC squad in 2015 and named him in the match day 23 to take on the World XV at Newlands in July 2015. After missing out on the RWC he rejoined the Stormers ahead of the 2016 Super Rugby season.

In June 2016, the then nine-cap Springbok announced that he would be joining Saracens on a two-year deal ahead of the 2016-17 season.

The 2016/17 campaign saw him excel as part of a Saracens side that retained their Champions Cup title, with a win against Clermont in Edinburgh, and his impressive showing in the semi-final against Munster earned him the man of the match award.

Koch continued his fine form during the 2017/18 season and has built a reputation as one of the best tightheads in European rugby. In September 2018 he earned a Springbok recall.

He was named in South Africa's squad for the 2019 Rugby World Cup.