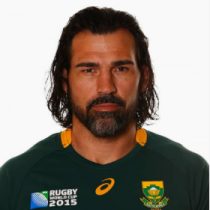 Victor Matfield is one of the most well-known rugby players in world rugby. He has had an incredible career which has seen him achieve what few have, among others he has won win three Super Rugby titles, two Tri-Nations titles and a World Cup.

After a glittering career, Matfield retired from the Springboks at the end of the 2011 Rugby World Cup, but came out of retirement in 2014 to join Heyneke Meyer's Springbok set-up and has since become the most capped Springbok in history and maintains a player/coach role at the Bulls.

In May 2016, Matfield played his final game for English club, Northampton Saints, and announced retirement from professional rugby.

Over the course of his career, Matfield has played a record of 127 Tests for the Springboks between 2001-2015.

In August 2017 Matfield joined the Lions as the sides new Forwards coaching following the departure of Johan Ackermann.