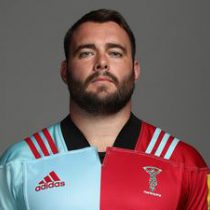 One of England’s most promising scrummaging talents, Collier has made 164 appearances for Harlequins since his 2011 debut against Wasps in the special LV= Cup match in Abu Dhabi.

While progressing through the Harlequins Academy, the former Cranleigh School pupil represented his country at U16 and U18 level, before helping England U20s to the IRB Junior World Cup final in 2011.

During an impressive 2013/14 season, Collier was named in the England Saxons squad but missed out on the fixtures against Ireland and Scotland due to injury.

He was however named in England’s squad to play the Barbarians at Twickenham in 2014 and was on standby for England’s three Test tour to New Zealand.

In June 2017, after hitting the 100 appearance milestone with Harlequins earlier that season, the 2013 LV= Cup winner made his England debut against Argentina in San Juan. In his second Test appearance, he scored a try in the win over Los Pumas, helping England to secure a series win.

In August 2017, After 108 appearances for Harlequins, the English international prop re-signed for the Club.

January 2020 saw him sign a new deal at Quins, extending his tenure in South-West London.