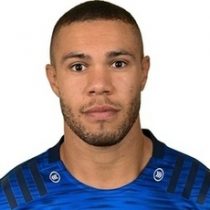 A strong ball runner, Byrne is a talented winger who is tipped for a long future in the game.

Atendee of CBC Naas, Byrne has represented Leinster and Ireland at u20 level and was a member of Leinster's 2013 inter-provincial winning squad.

During the 2015/16 season Byrne mainly featured in the Leinster 'A' side but in January, Byrne was selected for the senior side in their away clash against Newport Gwent Dragons in the PRO 12.

He made his senior debut at home to Zebre that season, finishing the season with two senior appearances. Byrne signed on professional terms with Leinster for the 2016/2017 season.

Byrne kicked off the 2016/2017 season in good fashion scoring 4 tries in two games for the province, one at home to Connacht and a hat-trick away to Zebre.

The Kildare man made his Champions Cup debut against Northampton Saints.

In April 2017, Leinster Rugby announced that Byrne signed a new contract with the club for the 2017/18 season and beyond.

Byrne started the 2017/18 season well and was named in Joe Schmidt's Ireland squad for the November Test against South Africa, Fiji and Argentina.

The winger made his test debut in the starting line up against Argentina.

Byrne has 55 Leinster caps to his name and has scored 100 points.

Heading into the 2019 Champions Cup, he has made 10 appearances at the tournament, scoring 30 points.

Irish Independent Try of the Year (2017)