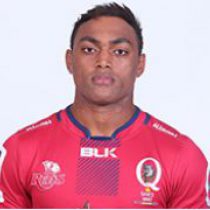 Kuridrani was selected for the Fiji Under-20 team and played in the 2010 IRB Junior World Championship in Argentina, and scored a try against New Zealand in the opening pool game.

He briefly switched codes at the start of 2011. He played rugby league in the Toyota Cup for the Brisbane Broncos for five rounds before returning to play Premier Rugby with GPS and train with the Queensland Reds squad.

Kuridrani was selected as an injury replacement for the Australia Under-20 team at the 2011 IRB Junior World Championship in Italy, and scored a try in the semi final against New Zealand.

Cousins to Tevita Kuridrani, Chris made his Super Rugby debut for the Reds against the Waratahs in 2014, and went on to score 10 points in 14 appearances for the Queensland side.

Despite playing 11 of the Reds 2017 Super Rugby matches Kuridrani was not retained in the Reds squad for the 2018.

Kuridrani joined Japanese side Honda Heat in 2018 before signing for Montpellier as a medical joker, where he will join his older brother Nemani Nadolo. Following a short spell at Montpellier he joined Counties Manukau for the 2019 Mitre 10 Cup

Brother of former Crusader and Fijian International ‘Nemani Nadolo’, he will add a real spark to the Highlanders stocks in 2020.

In 2019 he represented Counties Manukau in the NZ provincial competition.