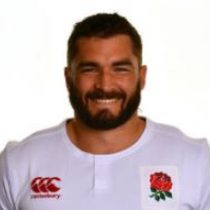 Armand was born in Harare, Zimbabwe. His parents were hypericum farmers, a product which they shipped off to Holland for distribution in Europe.

He started playing rugby aged 7. A sports fanatic, Armand also enjoyed hockey, tennis and a host of other sports at Highlands Junior school.

At 13, the family moved to Pietermaritzburg in South Africa due to the land invasions of Robert Mugabe's government. Moving to a similiar climate so the family business could continue.

On 17th July 2013, Exeter Chiefs announced the signing of Armand from Stormers on a two-year deal. The versatile back row struggled to find regular game time with the franchise.

Armand made his Exeter debut against Leicester Tigers in the Premiership in September 2013. He appeared 11 times in his first season, mostly as a replacement.

His second season with the club he made 10 starts in the league & enjoyed a breakthrough campaign in 2015-16 appearing 21 times domestically.

On July 10th, 2016, Armand became one of three Saxons players to sign a deal with Chiefs, committing his three-year future with the Premiership club.

Armand has continued to flourish in Exeter colours. He helped the club to reach a first-ever Premiership final in 2016, losing out to Saracens, but a year later put in a man-of-the-match display to help the Chiefs see off Wasps at Twickenham. He was also named in the Premiership’s Dream Team for the 2016/17 season.

In May 2017, Armand made his debut for England in the two-Test summer tour of Argentina & was included in the England squad for the 2018 Six Nations.