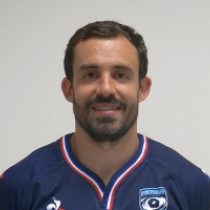 Having began his career at Montpellier, Doumayrou made 59 appearances for the Top 14 outfit between 2008-2012 before signing for Stade Francais, where he sharpened his skills with 54 appearances.

Doumayrou received a call up to the France national team for the 2018 Six Nations, his first inclusion in the tournament.

Ahead of the 2019 Six Nations, Doumayrou, named for the squad has had 4 previous 6 Nations appearances.

He went into the 2020 Top 14 season having made 48 appearances for La Rochelle and has scored 45 points.

In May 2021 Doumayrou announced he will rejoin Montpellier after being away for 10 years. He joins at the start of the 2021/22 season