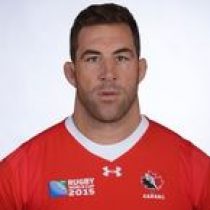 Known for his combative style of play, Cudmore has made his name as an enforcer in the Top 14, but is also well known for his hard carrying and high work rate. He represented Canada at his 4th World Cup in 2015.

Nicknamed 'Cuddles' by his teammates, he has a less than exemplary disciplinary record. Between 2005 and 2011 he accumulated 21 yellow cards and 3 red cards. That doesn't include citings and suspensions.

In March 2016, Cudmore announced his move to Oyonnax on a two-year contract which includes a formal role in a coaching capacity.

In May 2017, Cudmore guided Oyonnax to promotion to the top tier of French rugby. He announced his retirement from professional rugby at the end of the 2016/17 season.


Since securing his professional playing crampons, Cudmore developed his skills as a coach, having served as a coach at the Clermont Boys Youth Academy, and as a Rugby Canada coach for the Rugby Championship of the Americas. 2016, to then become head coach of the Oyonnax formation (France - Top 14) in 2017, and more recently as rugby director at Provence Rugby.

In July 2019, he was named as head coach of Canada's new Pacific Pride Academy, a national high-performance men's rugby program.