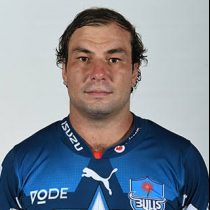 A product Hoër Landbouskool Oakdale, Jeandre Rudolph began his rugby journey for the SWD Eagles before heading to Potchefstroom to study after school. In 2016, Rudolph captained the North-West University Pukke to their first Varsity Cup title when they beat the Maties 7-6 right at the death in Coetzenburg.

In 2018 Rudolph joined the Pumas and in that year they beat the Griquas 32-30 in Oudtshoorn in the final of the SuperSport Rugby Challenge. Rudolph was named as the man of the match in the final for his stellar performance.

His continued form caught the eye of the Bulls who signed the back rower on loan from the Pumas and played in the Super Rugby for the Pretoria-based franchise.