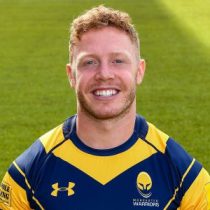 Born in Tunbridge Wells, England, Baldwin is a nippy scrumhalf with a sharp pass from the base of the ruck.

Having joined Saracens in the summer of 2010, Baldwin made his professional debut for the club in the 2011 English premiership season.

The explosive scrum-half was part of a Bristol Rugby side which reached the 2013/14 Championship play-off final and made a total of 25 appearances for the Ashton Gate side.

He joined the Worcester Warriors in 2015 and went on to make 32 appearances for the side before re-signing in February 2018.

In March 2019, he signed for Harlequins on a short-term loan.

The scrum-half joined Dragons on a season-long loan for 2019/20 and scored a try for the Welsh region against Warriors at Sixways when he came on as a second half replacement in a European Challenge Cup match in December 2019.

The scrum-half spent two years with the Dragons but was let go by Worcester at the end of the 2020/21 season.

After his release, Baldwin announced his retirement to pursue a career in finance.