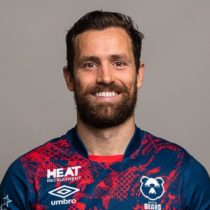 Luke made the No.15 jersey his own throughout a Super Rugby campaign where he featured in all 17 games during the Reds’ Australian Conference winning success.

He’d also been involved in the national set-up since the Spring Tour in 2009, where he was a late call up as a replacement for injured then-skipper Stirling Mortlock after showing blitzing form for Australia on the Sevens World Series circuit.

Luke officially joined the Reds senior squad in 2010, a season where he was limited to just six appearances. While limited in opportunity, he showed his game-breaking potential by scoring the match winning try against the Chiefs in his first start of the season.

In July 2016, Morahan and the Western Force signed a deal that allowed the fullback to remain at the side until the end of the 2017 Super Rugby season.

The utility back – who can play wing, full back and centre – has three caps for the Wallabies, as well as starring for Australia Sevens.

Bristol captured the signing of the Australian international ahead of the 2017/18 season.

In 2018, he led the try-scoring charts in the Championship, earning a spot in the team of the season.