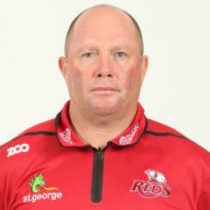 In 2005 he joined Munster as a defence and backs coach and later took up the Head Coach role following the the departure of Declan Kidney to the Ireland team. In May 2011 he coached Munster to win the 2010–11 Celtic League Grand Final against Leinster. At the end of the 2011-12 season McGahan left Munster to take up a role as Australian defence coach.

McGahan become the Melbourne Rebels coach at the start of the 2014 season, and has the highest win percentage of any Head Coach in the Club’s short history.
He has also had many successful tours where the Rebels have beaten the Crusaders in Christchurch and many more upsets.