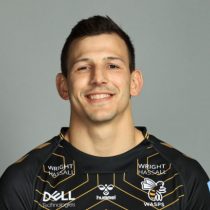 Born in Exeter, England, Mills is a talented ball distributor who is comfortable at both flyhalf and centre. His professional career began in 2012 when he made his debut for West Country side Gloucester. Mills has also represented England at Under 20 level.

Mills, who can play at fly-half or centre, joined Warriors in the summer of 2014 and quickly established himself within the first-team, making 18 appearances in Warriors' Championship, promotion-winning campaign.

He was an ever-present once again in the 2016 season, featuring in 21 of Warriors' 22 Aviva Premiership matches and has impressed playing at fly-half during this campaign, while also having skippered the side in the European Challenge Cup.

He amassed 168 points by January 2017 at Worcester and played a significant role in the 2016/17 season as he helped Gary Gold’s side beat the drop, including an unforgettable 24-point haul from the tee as Warriors beat Saracens at Sixways.

In January 2018, Mills committed his future to Worcester after signing a new long-term deal.

Mills reached his century of Warriors appearances when he captained the side in the European Challenge Cup match in Castres in November 2019. In doing so, he became the 23rd Warrior to reach the landmark in the professional era.

In February 2020 Warriors and Mills mutually agreed that he could talk to other clubs with a view to being released a year early from the contract he signed in early 2018.

The following month, it was announced that Mills had signed for Premiership rivals Wasps from the 2020-21 season.