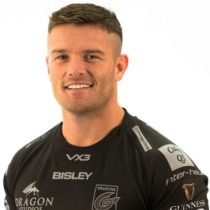 Tavis Knoyle's youth career started at home town club Glynneath RFC before he made his senior debut at Neath RFC, and made his Celtic League debut with Ospreys in April 2009.

During his time at Scarlets, he earned a test call up and debut for Wales during Wales' tour to New Zealand in 2010. He went on to make the Wales' 2011 Rugby World Cup squad and played just one game for the side during the competition.

After over 60 appearances for Scarlets, he joined English Premiership side Gloucester on a two-year contract in June 2012.

He played just 13 games for Gloucester before returning to Wales signing with the Cardiff Blues. Knoyle was loaned out to Pontypridd RFC 8 months later and made his debut for the club on 11 October 2014 against London Scottish in the British and Irish Cup. Knoyle played his final game for the valleys team against Connacht on 6 December 2014, before making his return to his parent regional side.

On 16 October 2016, Knoyle signed for Welsh region Dragons from the 2016-17 season becoming one of the few Welsh players to play for all four Welsh regions.