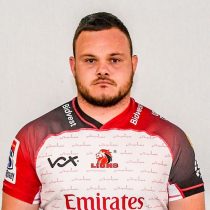 Born in Durban but schooled at KES in Johannesburg, Dylan Smith showed early promise representing the Lions U18s while still 17.

Widely known as the babyface assassin due to his strong scrummaging presence, Smith has been tipped for higher honours but his early career was hit with injury.

The former SA Schools representative saw him make the Lions senior squad and in 2016 he made his first Super Rugby appearance, coming off the bench in Round 1 against the Sunwolves.

He missed just two games for the Lions in his debut Super Rugby season making 16 appearances, including a start in the Super Rugby Final against the Hurricanes.

It was his second that was hit with injury as he featured in just two Super Rugby games but recovered in 2018 to help his side reach the final making 18 appearances.

The promising loosehead made a further 11 appearances in 2019 and went into the 2020 season with 48 Super Rugby caps.

In March 2021, Smith left the Lions with immediate effect before heading to France to join Stade Francais.