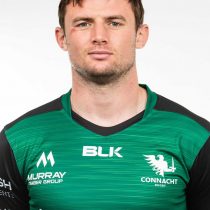 After representing Scotland at the 2013 Junior World Cup, Masterson approached Connacht for a trial and impressed enough to be invited into the Academy.

In 2015, he was named in the Emerging Ireland squad for the 2015 Tbilisi Cup, being used as a replacement.

Masterson suffered a knee injury in February 2016 that ruled him out for a long period, the Portlaoise native has gained match fitness through the Connacht Eagles and Galwegians in the UBL.

He captained Connacht for the first time in the Challenge Cup clash at home to Worcester Warriors earlier in October 2017.

After almost 60 appearances for the province including 22 in the 2017/18 season, Masterson signed a two-year extension to his contract to take him up to the end of the 2019-20 season.

As of April 2020, he has made 89 appearances for the Irish province.