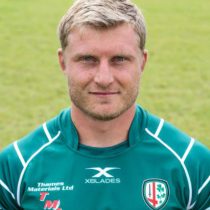 Franco began his career with the Leopards in the Currie Cup before moving onto the Golden Lions.

In 2007 he moved up to their Super Rugby franchise where he made 85 appearances and won his Springbok cap.

Following his first season with Ulster, he was named in the PRO12 team of the year and he became a prominent leader at the province.

Van Der Merwe was due to join Cardiff Blues for the 2017/18 season but after signing a contract he was released from his contract, with the understanding being that the Blues had enough locks.

In Augusy 2017, London Irish announced the signing of South African second rower for the 2017-18 season.

After making just under 200 appearances for South African side the Lions, van der Merwe made the switch to fellow Super Rugby outfit the Sharks in 2013 prior to joining PRO14 club Ulster a year later.

A mainstay of Ulster’s pack, van der Merwe played 73 times for the club including appearances in the European Rugby Champions Cup during three seasons at Ravenhill.