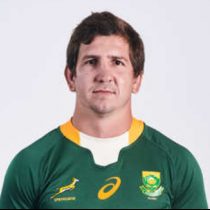 Educated at HTS Middelburg, Smith represented the Pumas U18 team in 2010 & 2011. The blindside flank then moved to the Lions in 2012 where his performances for the U19 team earned him a call up to the Baby Boks for the 2013 IRB Junior World Championship and the South African 7s squad for the 2013/2014 IRB Sevens World Series.

Smith has been one of the standout performers for the Blitzboks during the 2016 campaign, helping South Africa emerge as one of the front-runners for international titles.

The forward’s individual value as a ball-carrier and tackler have been big boosts towards South Africa.

Smith decided to focus on the 15-man game ahead of the Super Rugby season and withdrew from the Blitzbok World Sevens Series campaign.

Smith was in fine form for the Lions during the 2017 Super Rugby season scoring 8 tries in 18 matches as the Lions made their way to the Super Rugby Final.

Unfortunately for Kwagga he was shown a red card for playing David Havili in the air and spent the majority of the final on the sidelines.

Smith missed selection for the Springboks end of year tour but was named in the Barbarians squad to face the All Blacks.

He had an outstanding game against the New Zealand and was named as the man of the match.

After represented the Barbarians Smith returned to South Africa and linked up with the SA Sevens squad for the upcoming World Seven Series season.

The busy flanker opted to stay with the Lions during the Super Rugby season and ruled himself out of the Commonwealth games to chase a Springbok call up. The decision paid dividends after he was named in Rassie Erasmus' Springbok squad for the 2018 June Internationals.

Smith played a key role in helping the Springboks to the Rugby Championship trophy in 2019 and was included in the Boks squad that went on to beat England in the Rugby World Cup Final in Japan.

The livewire flanker plies his trade with Yahama Jubilo in the Top League and was once again included in the Bok squad to face Georgia and the British and Irish Lions.

He heads into the tests with 6 tests caps.