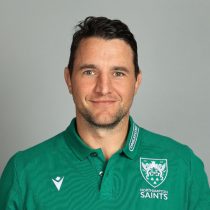 The athletic number 8, who can also play flanker, made his England debut in a 2012 Six Nations game away to Scotland. Dowson’s England debut was testament to the hard work he had done for Newcastle Falcons, Northampton Saints and the England Saxons.

Dowson, who switched from Newcastle to Northampton in 2009, was part of the Falcons 2004 Powergen Cup winning side.

He made an instant impression with Northampton, winning their player of the month award for December 2009 and becoming a key component of the side that would reach the 2011 Heineken Cup Final.

Downson was part of England’s 2005 Sevens World Cup winning side in Hong Kong and had represented the England Saxons for several years before, finally, gaining his first England cap in 2012. To date, Dowson has won 7 England caps.

In February 2017 Worcester Warriors confirmed that Dowson will retire from rugby at the end of the 2016/17 season to take up the role of Assistant Coach with former club Northampton Saints.

In August 2020, he renewed his contract as Saints' forward coach.