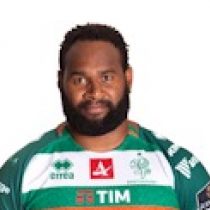 Also able to cover the role of center, Ratuva is a physical prowess combined with strong explosiveness.

Raised in the Ratu Kadavuleva School and then going to the Hamilton Old Boys, he wore the Waikato jersey in the 2016 season and placed second in the Mitre 10 Cup for the most tries, only behind Rieko Ioane of Auckland.

In April 2017 called by Bruce Reihana, then Bordeaux's skills coach, Ratuva moved to France collecting some presences with their development team and training with the first team.

He ended the season with Waikato and signed with Benetton Rugby since the 2018/2019 season.

As of December 2019, he has made 22 appearances for Treviso and has scored 35 points.