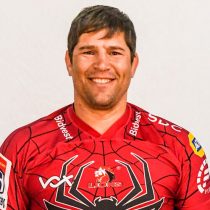 Known as one of the most powerful ball-carriers in international rugby, the human wrecking ball makes as much of an impact on defense as well.

He has played at both No.8 and at lock for the Sharks but is most effective as a blindside flank where he is able to dominate the gainline battle for his side.

He moved to the Sharks in 2010 and later was selected to the Springbok squad of 39 players to prepare for the November tour of Europe the same year.

Born in Pretoria, Alberts spent the first 4 years of his professional life at the Lions where he played Currie Cup and Super Rugby. In 2010 he made a rather controversial move to the Sharks in Durban and later was selected to the Springbok squad of 39 players to prepare for the November tour of Europe the same year.

Alberts signed for Stade Francais in 2015 and was handed a new one-year contract in April 2018.

In January 2020, he signed a new deal with the Lions ahead of the 2020 Super Rugby season.