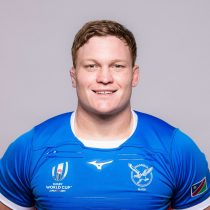 Making his way through the youth ranks at the Leopards, van der Westhuizen's talent propelled him to his International debut for Namibia at the age of 18.

Affectionately known as Chucky, van der Westhuizen previously captained the North-West University Pukke in the Varsity Cup, and went on to represent Namibia at the 2015 Rugby World Cup.

In 2019, he won the Johan Claassen Trophy as the NWU’s Rugby Institute Player of the Year.

Van der Westhuizen has played in two Rugby World Cups including the 2019 tournament in Japan.