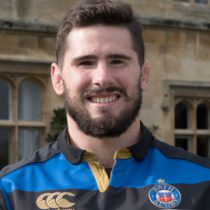 Australian born hooker Nathan Charles started his professional career at the Brumbies in 2008 and headed to the Western Force for 2 weeks in 2009 as injury cover. Those 2 weeks turned into 7 seasons as Charles built a reputation as one of the best Australian hookers in Super Rugby.

He debuted for the Western Force in 2010 at the age of 22 and in 2011 he had a short stint with English side Gloucester, making 3 appearances.

At just three months old Charles was diagnosed with cystic fibrosis, a genetic disease that significantly effects the lungs and the pancreas.

Charles made his international debut for Australia against France in 2014 and earned a further 3 caps that year.

He left the Western Force at the end of the 2016 season to join French side Clermont, having made 83 Super Rugby appearances scoring 5 tries.

In March 2017 Charles joined English side Bath. In November 2017, he then joined Wasps on a three-month contract as injury cover.

Charles started his Bath career well and in December Bath confirmed that the hooker would remain at the club for the remainder of the season.

After 10 appearances for Bath, Charles left the Club to join Melbourne Rebels.