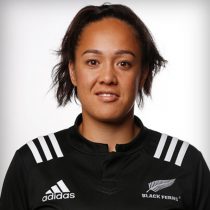 Versatile, tenacious and an inspirational leader, Arihiana Marino-Tauhinu earned a Black Ferns call-up in 2015 after multiple successful seasons at provincial level and establishing her credentials as a leader and sportswoman.

Marino-Tauhinu was a key part of the Counties Manukau Heat side which re-joined the Farah Palmer Cup competition in 2013.

In their first season back, Marino-Tauhinu turned out at first five-eighth for all seven matches and scored 30 of the Heat's 179 points as kicking back-up to Hazel Tubic.

Marino-Tauhinu was also part of the Counties women's sevens side that contested the National Sevens in 2015.

More recently, Marino-Tauhinu has found her home playing halfback for the Heat and has gone on to become one of the team’s most important players'.

She now holds the record for most appearances for the Heat (45) and has scored a team-record 211 points.

In 2018, the halfback proved her importance to the team, playing all of the Heat’s matches, which culminated in defeat in the Farah Palmer Cup Premiership to Canterbury. Marino-Tauhinu finished the season as leading points scorer with an impressive haul of 43.

In March 2019 Marino-Tauhinu was one of four new players to be offered a 2019 Black Ferns contract.

Although making Black Ferns squads in 2015 and 2017, she is yet to make her national debut. However, Marino- Tauhinu is a gifted sportswoman and has previously worn a black jersey when she turned out for the New Zealand women's rugby league team, the Aotearoa Maori sevens side and age grade and Maori Touch Rugby sides.