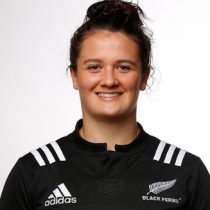 Hooker Forne Burkin is a versatile forward renowned for her defence, accuracy at the lineout and turnover skills at the breakdown.

Originally from Gisborne, Burkin made her Farah Palmer Cup debut for Hawke’s Bay in 2017 playing at hooker in all six of the side's games.

Burkin made the switch to Canterbury for the 2018 Farah Palmer Cup season after moving to the region to study at Lincoln University and made her debut in the opening game of the season against Bay of Plenty.

Burkin highlighted her versatility and skillset throughout the 2018 season. A specialist hooker by trade, Burkin started all eight games for Canterbury, including four games at hooker and four games at loose forward.

A key part of the Farah Palmer Cup Premiership final victory over Counties Manukau and, in the wake of legendary Black Ferns hooker Fiao’o Faamausili's retirement in 2018, Burkin will look to establish herself as one of the country’s premier players in her position.