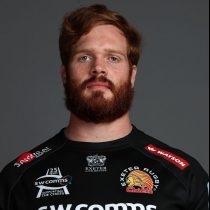 Johannes Casper Kirsten, AKA Jannes, is another physical and abrasive second-rower who is also capable on the side of the scrum to emerge from the famed Afrikaanse Hoër Seunskool, in Pretoria.

Kirsten did not represent the Bulls while at school but did join the Blue Bulls Academy in Pretoria after finishing school.

He made eight appearances for the Blue Bulls U19 side during the 2012 Under-19 Provincial Championship as they finished second on the log to qualify for the semi-finals. Two of Kirsten's appearances came in their 46–35 semi-final victory over the Sharks U19s and the final, which they lost 18–22 to Western Province U19.

Called up to the Bulls Vodacom Cup team in 2013 - where he made his first-class debut - Kirsten was then selected for the South African U20 team that toured Argentina and then France for the IRB Junior World Championship.

Kirsten returned to domestic action with the Blue Bulls U21 side and made nine appearances for them during the 2013 Under-21 Provincial Championship. In 2014, Kirsten represented Pretoria-based university side UP Tuks in the 2014 Varsity Cup, which ended in disappointment as they finished in sixth spot to miss out on the semi-finals.

Another year of fine Varsity Cup performances saw Kirsten earn a place in the Blue Bulls Currie Cup squad for the first time in 2015. Kirsten followed in his brother Frik's footsteps in 2016 when he was included in the Bulls Super Rugby squad with his brother featuring in the front row for the Bulls making 81 appearances for the Bulls and Blue Bulls between 2008 and 2014.

He made a massive impact in his debut season with the Bulls in Super Rugby featuring in all 15 of the side's games and missed just two games in his second season. An injury struck 2018 saw him make just three appearances with his fourth and final season saw him making 15 appearances before he signed a one-year deal with Premiership club Exeter Chiefs as injury dispensation.

During his time with the Bulls, he made 46 appearances for the side. Kirsten quickly made an impact at Sandy Park and after playing 22 games and scoring three tries for the side, Kirsten was rewarded with a contract extension at Exeter.

Kirsten’s hard-hitting, no-nonsense approach, together with his fantastic work ethic, have not only won him many admirers within the game, but has also seen him establish himself as an integral cog in the Exeter engine room.