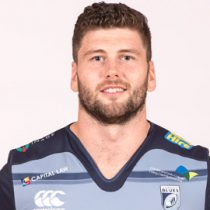 Bennett is a Welsh u20 international Flanker who played for Scarlets from 2013 to 2015, he then joined Northampton Saints in 2015, on a one year deal that was later extended.

The versatile back-row forward then joined Cardiff Blues on a short-term contract as injury cover in February 2017, and following a string of impressive performances, which have included three tries, Bennett earned a new contract.

A bit of a hidden gem unearthed in the middle of the injury crisis last season, Bennett originally joined on loan from Northampton having been released from the Scarlets setup as a youngster.

Two seasons of not making much impact on the first team at Franklin's Gardens may have impacted the back rower's fitness, but he hit the ground running with three tries in eleven games for Cardiff.

With fans and coaches alike impressed with his committed ball carrying and defensive displays, Bennett, who is a blindside flanker by trade, can cover at number eight. This could work to his advantage well with Nick Williams requiring his game time to be managed and Welsh number eights being at a minimum currently.

Bennett heads into the 2018/19 season with 16 appearances for Cardiff Blues and has scored 15 points.