Recap of how the Irish teams fared in the Six Nations


Ireland dashed Wales’ goal of a second consecutive grand slam yesterday at the Aviva Stadium as they emerged as victors with a score of 24-14 in a superb game of rugby.

Irish captain Johnny Sexton was full of praise for his team after the final whistle, singling out his halfback partner Conor Murray and marauding number 8 CJ Stander in particular.

A first minute movement from the Irish saw them swing the ball skilfully to winger Jacob Stockdale who chipped it up towards the try line with a sea of green jerseys in pursuit before Welsh fly-half Dan Biggar scampered back to narrowly save what would have been a certain try. This movement seemed to set the tone for the rest of the game as Ireland’s pressure on their opponents was unrelenting.

The Irish forwards were aggressive and clinical, setting a secure foundation for the talent of the backline to enjoy fruition.

Tries were scored by fullback Jordan Larmour who crashed over in the 20th minute after some poor Welsh tackling, Tadhg Furlong bulldozed his way to the line in the 32nd minute, Josh Van Der Flier scored off a rolling maul just after the half-time break and Andrew Conway dived over in the corner five minutes before the end.

Sexton and his charges face the mammoth task of taking on England at Twickenham on 23 February. Their performance this round, however, will leave them with confidence going into that encounter which promises to be one of the highlights of the season. 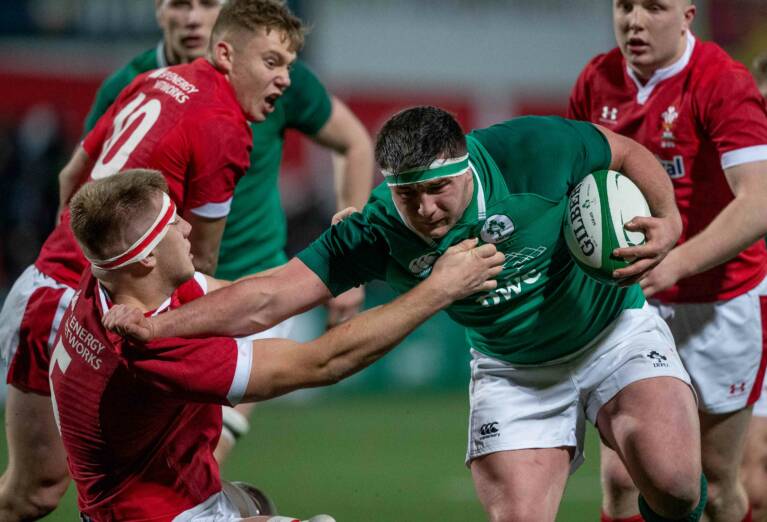 The wind and rain at Independent Park in Cork did nothing to dampen the spirits of a stout-hearted Irish under 20 team as they romped to victory over their struggling Welsh opponents.

Ireland already had the bonus point in the bag at half-time when they led 31-7.

Wales initiated a fight-back after the break, managing a penalty kick and penalty try to ignite a glimmer of hope which was, however, soon snuffed out when Ireland scored off a Welsh over-throw at a lineout, putting the game out of Wales’ reach.

Ireland face England in Round 3 in what promises to be a titanic match-up.

The Ireland senior women’s team took a leaf out of the men’s side’s book with a convincing defeat of Wales at Energia Park  yesterday. The final score of 31-12 was an accurate reflection of proceedings as the Welsh were out-played in all facets by the women in green.

Ireland ran in four tries and a penalty try in terrible conditions to give them good momentum going into Round 3 where they take on the English.