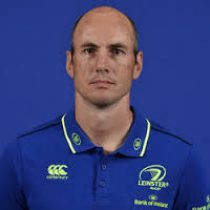 Former Leinster and Ireland full-back Dempsey was appointed Leinster Academy Manager in November 2012. He was Elite Player Development Officer with the province since summer 2010.

The former Terenure College full-back ended an illustrious playing career with the province in May after making 175 provincial appearances which included Celtic League, Magners League and Heineken Cup honours.

A former Ireland Under-21 and ‘A’ cap, he represented Ireland on 82 occasions; featuring in two Rugby World Cups and was part of the Ireland team that won Triple Crowns in 2004, 2006 and 2007.

In recent years he has assisted his former alma mater as well as Terenure College RFC in the All-Ireland League.

Dempsey was appointed to the role of backs coach in August 2015 initially until the end of the Rugby World Cup but was made permanent shortly thereafter.

In April 2017, Leinster re-signed Dempsey on a one-year deal.

He was named on the Ireland coaching staff for the summer tour to USA & Japan.

In May 2018, the former Irish international joined Bath Rugby as attack coach, linking up with Todd Blackadder’s coaching set up, which included Stuart Hooper, Toby Booth and Darren Edwards.