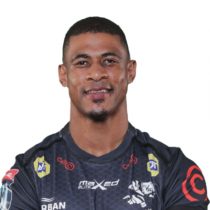 After a stellar stint with UWC in the Varsity Shield, Volmink headed North and signed a deal with the Lions.

He made his Super Rugby debut on June 2, 2012 for the Lions against the Sharks in Johannesburg. He started the game before being replaced by Ruan Combrinck in the 61st minute of a 38-28 Lions victory.

On 27 April 2013, he broke the South African tries-per-game record when he scored nine tries in the Golden Lions 161–3 victory over the hapless Limpopo Blue Bulls in the 2013 Vodacom Cup.

Volmink's career was been hampered by untimely injuries but the speedster still has the ability to open the opposition's defence and race away to the try line.

Volmink continued to ply his trade with the Lions in the Super Rugby, Currie Cup and Supersport Challenge Cup but spent most of the 2016 & 2017 Super Rugby seasons behind Springbok wingers Ruan Combrinck and Courtnall Skosan.

In November 2017 he signed a deal which saw him join the Southern Kings Pro 14 side, having spent more than 5 years with the Lions playing in 18 Super Rugby matches and scoring 4 tries.