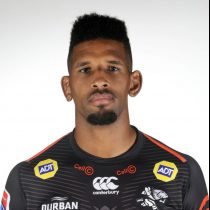 Despite playing for the Sharks and representing the Bulls at youth level, Andrews is actually a Paarl-born lock, who attended Hoërskool Garsfontein in Pretoria.

He quickly made an impression when being selected for the Blue Bulls at under 16,18 and SA Schools team, who he represented in 2012.

He was also selected as a member of the SARU's under 16 High Performance squad in 2011.

After school Andrews joined the Sharks Academy and joined the Under 19 team that reached the semi-finals of the ABSA U19 Provincial series.

Andrews has since represented the Sharks in the Currie Cup and Super Rugby, as well as the Springboks U20 team in 2015.

The towering lock was included in the Sharks 2018 Super Rugby squad and entered the competition with 10 caps since making his debut against the Kings in 2016.

He finished the 2019 season having accumulated 18 Currie Cup and 37 Super Rugby caps for the Sharks.